Skip to content
The New York Times
By PATRICIA COHEN

Doors at many Macy’s, Sears and J. C. Penney stores may still be open, but some of the jobs they once supported are starting to vanish.

After hitting a low point during the recession in December 2009, the retail sector has reliably been churning out more jobs. Though the Labor Department’s monthly employment summary provides only a snapshot of the labor market, this is the second month in a row that retail payrolls have registered substantial losses — a possible sign that larger structural changes are in the works.

“E-commerce and technology have absolutely changed the rules of the game and given massive amounts of power to the consumer,” said Simeon Siegel, a retail analyst at Nomura. “There is a self-help mentality now. People walk around with their phones in their hand to tell them the best model and the best price. You don’t need as many people walking around trying to convince you to buy a sweater.”

The vitality of the retail sector has been muscled out of the spotlight lately by a focus on better-paying manufacturing jobs, which President Trump sees as crucial to the revival of the middle class, particularly in the Midwest and the South. But retail outlets still employ millions of Americans and serve as an entry point into the labor force, especially for those with less education and fewer skills.

Remember that while General Motors was once the single largest employer, today Walmart is. 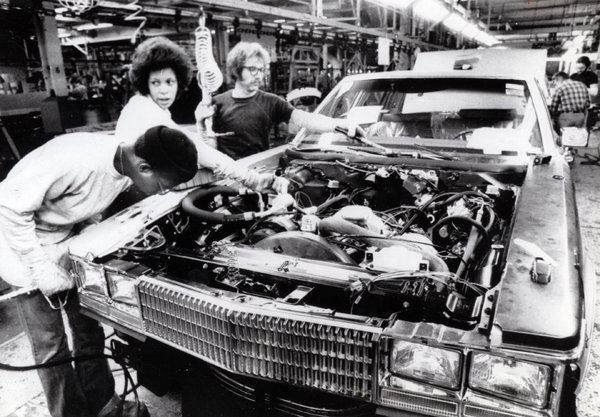 Workers in the 1970s at a General Motors plant in Detroit. The automaker was once the single largest private employer in the United States.
DAN DMITRUCK / UNITED PRESS INTERNATIONAL

Yet even Walmart is having to contend with a sea change in the way people shop. The company, for instance, has been closing smaller stores in rural areas, according to Barbara Denham, a senior economist at Reis, a real estate data and analytics firm.

Jack Kleinhenz, the chief economist at the National Retail Federation, does not discount the magnitude of the transformation that is occurring in retail, but cautioned that the monthly job figures are also highly subject to temporary vagaries. “One of the challenges we have at this time of the year is the quirkiness of seasonal forces,” he said.

An unexpectedly warm February and snowy March and the late arrival of Easter could have elbowed the numbers in an uncharacteristic way.

The retail employment number, he said, does not necessarily “translate into backsliding of retail sales.”

Diane Swonk, the chief executive of DS Economics in Chicago, agreed. The falloff in hiring “is not a reflection of a consumer than can’t spend, but rather of how they spend,” she said. “Retail is one of the largest employers in the country, and it’s going to go through a pretty massive secular restructuring. We shop differently now, and no one has the right model.”

Most shopping is still done in person rather than online, but shopping patterns are shifting. Ms. Swonk mentioned research that shows consumers like to buy online but return things to bricks-and-mortar stores.

“Clearly, it’s just not one or the other, not just bricks or clicks,” she said. But the marketplace is rapidly changing and retailers “are not sure what the endgame is.”

E-commerce may cause a drop in retail jobs, but a rise in warehouse, distribution and transportation jobs.

At the same time, consumers have not only been changing how they shop, but what they buy. Ms. Denham noted that while the entire retail sector ended up down nearly 30,000 jobs, the restaurant industry showed a gain of 20,000 in March on top of steady previous growth.

“There’s been a shift in consumer spending from things to experiences,” she said, “that’s why restaurants are doing so well.”