According to the organization’s latest survey of 53 professional economic forecasters, the consensus is that the economy will continue to grow at a 2.6% pace in 2019, down from last year’s 2.8% rate, and will slow to 2.1% in 2020. However, as the outlook for this year still seems good, a majority think a recession is possible before the next presidential inauguration.

Personal spending remains a bright spot. “The consumer continues to be the driver in the U.S. economy,” said Jack Kleinhenz, chief economist for the National Retail Federation and one of the analysts of the report. “Real personal consumption expenditures for 2019 is 2.4% year-over-year growth. It was 2.6% in 2018.”

But not all is good. “There are really headwinds in the housing market in terms of residential investment,” Kleinhenz said about this important “piece of the consumer equation.” The group expects that residential investment in 2020 will be down 1.3% from 2019’s levels. Because home prices have risen, particularly in the lower third of housing stock, many are now priced out of the market.

More than half of the panel said “the greatest downside risk is trade policy and increased protectionism,” Kleinhenz said. The thorny issue is a major driver of the possibility that growth could collapse by the end of next year. Right now, only 15% of the participants expect a recession in 2019. But by the end of 2020, the number rises to 60%. Because the November election is in the last quarter, if the majority of predictions are right, a recession would begin by then.

Only 35% thought that when the group surveyed its members in March. And these results do not fully take into account the escalated trade war situation. “Since the survey was done between May 6 and 14, 2019, the panelists could not take into account the most recent proposal by President Trump to impose a series of tariff increases from 5 to 25 percent on Mexico,” said Stephen Miller, director of the UNLV Center for Business and Economic Research at the University of Nevada, Las Vegas. “This significantly raises the uncertainty in international markets and would significantly lower the growth forecasts that are reported today as well as increase the projected likelihood of a recession.”

That drives up the chances that CEOs and CFOs could be “hesitant to spend their ample retained earnings gained over the last number of years,” said Benjamin Pace, chief investment officer and partner at Cerity Partners. “This hesitancy could slow economic growth to a trickle and even provoke recession sooner than one needs to occur based on the current strong shape of the US consumer.”

For the majority of U.S. households, residential real estate is the single-largest asset on the balance sheet. Prevailing home equity levels–and expected home value changes–can have out-sized influence on consumer spending and behavior (i.e., wealth effects). As an asset class, U.S. housing has an aggregate value of almost $30 trillion. For these and other reasons, the home value expectations of experts bear watching, and forecasters with the most outstanding performance deserve recognition.

In every year since 2010, Pulsenomics has recognized the most accurate and reliable forecasters of U.S. home values with a Crystal Ball Award. More than 100 experts who participate on our panel vie for the honor in a variety of award categories by predicting the future path of the Zillow Home Value Index.

This year, Jack Kleinhenz (pictured), who heads Kleinhenz & Associates and also serves as chief economist of The National Retail Federation, earned first-place in two prize categories, including one that is arguably the most challenging: the five-year horizon. Jack won this prize in an especially impressive fashion. The actual cumulative change in U.S. home prices for the five-year period ended Dec. 2017 was 32.9%; back in 2013, Jack predicted prices would increase 32.8% over that period. That’s not a typo. Drop the mic, Jack!

Pulsenomics’ Top Ten panelist rankings include details of forecast accuracy in each of 11 categories. Please join me in congratulating all of our 2017 honorees! 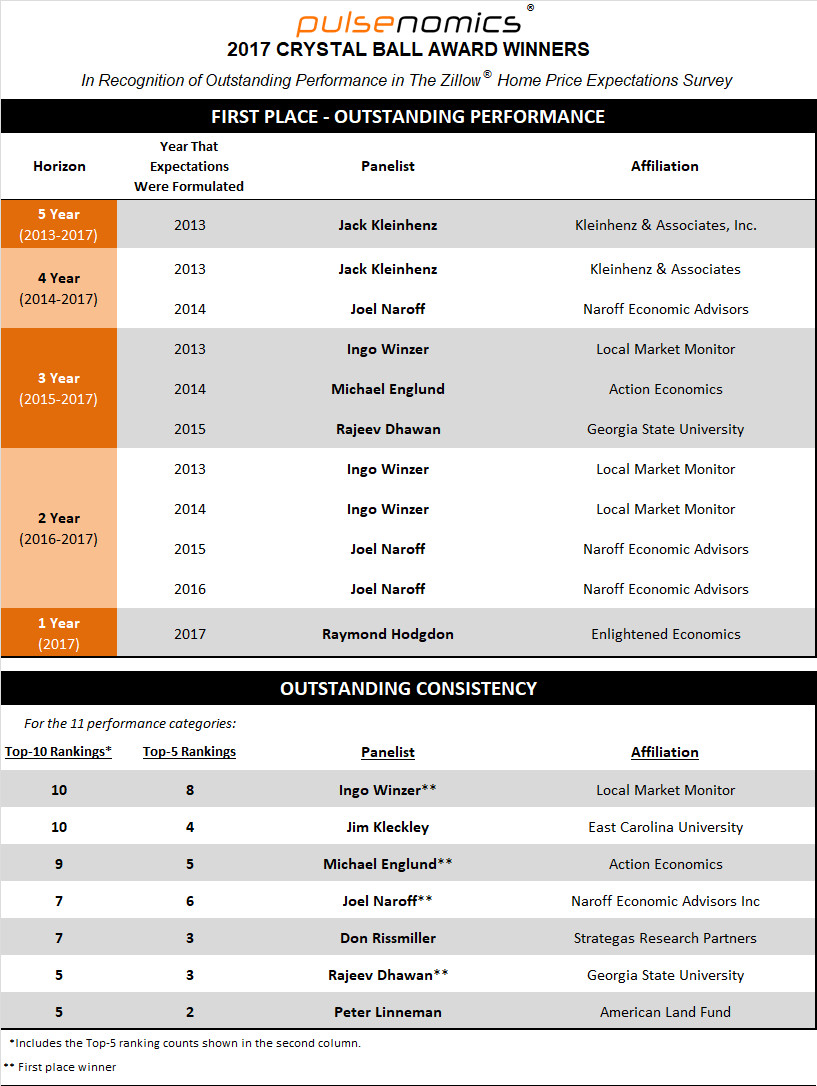