As the chief economist for the largest retail trade organization in the world, Jack Kleinhenz’s days revolve around big data and economic forecasting models. With over 35 years of experience, Kleinhenz is well-versed in examining data patterns and trying to provide some perspective. “I’m a storyteller,” he says, and forecasting is “like a jigsaw puzzle.” Raw data is put into models and it’s Kleinhenz’s job to provide the narrative — a combination of art and science.

On this week’s episode of Retail Gets Real, Kleinhenz sits down in the podcast studio to explain how and why we forecast the economic future and what he thinks is on the horizon. 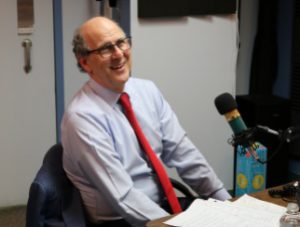 Jack Kleinhenz in the podcast studio

While economists use different models, they all use the same variables, so there are established core patterns. To measure income levels, for example, the Bureau of Economic Analysis collects data on a month-to-month basis, taking into account such factors as personal income, after-tax income and consumption levels. “These are estimates,” Kleinhenz clarifies. “They’re not perfect numbers.”

To get a more accurate picture, part of Kleinhenz’s job is to continually converse with retailers. “It’s kind of a moving picture we’re trying to figure out,” he says. Technological innovations have greatly changed the task of forecasting. The concept of big data is transformative; when information comes in real time instead of through surveys, it greatly increases the accuracy of predictions.

“The market has been changing and consumers have changed their behavior.”
Jack Kleinhenz

“What’s going on in the financial markets and these stores does not necessarily mean that consumers have gone away and stopped shopping,” Kleinhenz says about the shifts taking place in the retail industry today. “The market has been changing and consumers have changed their behavior.”
Kleinhenz is optimistic about the future, saying the changes have more to do with demographics: The dense population in the U.S. Midwest 20-30 years ago, as one example, has moved to more urban areas in the Southeast and Southwest, and the shopping malls that catered to their needs do not attract as much demand anymore.

Another reason is that consumers don’t spend the way they used to. Younger consumers have drastically different buying habits, make life decisions later and seek more experiences — opposed to products — than older generations. “People still want to shop,” Kleinhenz says, “It’s recreational. It’s social.”
Listen to this week’s episode to learn why the perception of retail’s transformation is far from the reality, and catch up on some of our most popular past episodes, like Get ready for Gen Z and the future of the retail store.

Susan Reda is one of NRF’s co-hosts on Retail Gets Real. Meet all the co-hosts and learn more about the show.